Memorial Day is an American Holiday observed on the last Monday of May. This year that is Monday May 25.

It’s Rooted in its founding event in 1866. Every year a national Moment of Remembrance takes place at 3:00 p.m. local time to remember those who died serving in the United States Military, and their families.

The idea for the Moment was born in May 1996 when children touring Lafayette Park in Washington, DC, the nation’s capital, were asked by the Commission’s Director what Memorial Day means. They responded, “That’s the day the pools open.” A May 2000 Gallup poll revealed that only 28% of Americans knew the true meaning of Memorial Day. The White House Commission on Remembrance was established by Congress (via PL 106-579) to promote the values of Memorial Day by acts of remembrance throughout the year. (Wikipedia)

One of the greatest blessings we enjoy in the United States is its freedoms. Multitudes of men and women have battled through the waves, fields, skies, concrete science and technologies of war. Today 2.5 million are in uniform to serve on the home front / or are deployed and serve defending our freedoms; giving sacrificially of time and life.

The Picture of Indiantown Gap National Cemetery is courtesy of Marge Hepner currently a resident in the Willow Valley Retirement Community and is a Volunteer at Building Bridges Foundation. Her husband Harry, an AM2 US Navy World War 2 Veteran and a retired school teacher, enjoyed some retirement years at Willow Valley until his death at 98 years. 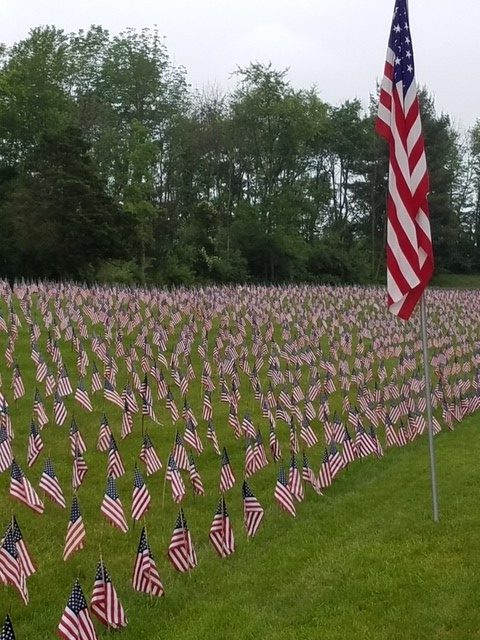 In the United States it’s a Memorial Day tradition to wear a poppy to commemorate the sacrifice of the multitudes of men and women who have given and those who are currently giving their time and even their life serving in the United States military.
In this COVID-19 “stay home” chapter of 2020 take time to absorb the poem written by Lieutenant Colonel John McCrae who served as a brigade surgeon for the Allied artillery unit in World War 1; he spotted a cluster of poppies in the midst of the carnage of battle in which lethal chlorine gas was unleashed for the first time in war and more than 87,000 allied soldiers were killed. One of them was a close friend of his…

In Flanders fields the poppies blow
Between the crosses, row on row,
That mark our place; and in the sky
The larks, still bravely singing, fly
Scarce heard amid the guns below.
We are the Dead. Short days ago
We lived, felt dawn, saw sunset glow,
Loved and were loved, and now we lie
In Flanders fields.
Take up our quarrel with the foe:
To you from failing hands we throw
The torch; be yours to hold it high.
If ye break faith with us who die
We shall not sleep, though poppies grow
In Flanders fields.

The World is broken. At Building Bridges Foundation we respond to it with Truth, Compassion, Prayer and Life: “greater love…lays down life”

Our mission is to provide a safe space for personal growth through Equine Assisted Activities for veterans and their families, as well as those suffering from trauma and loss, and those who are struggling with cognitive and emotional challenges. At no cost to the Veterans.

Click here to view “Warrior Ranch” (1 minute 3 seconds)
Published May 2020 with retired bomb technician Joey Jones for insight on why we use race horses in “the return” journey.

See some of the horses who serve as equine therapy partners here at Building Bridges Farm:

Tanglewood will be donating $5/round all weekend to Building Bridges.

Enjoy the fun of the day & Help Tanglewood Golf Club Donate to Building Bridges Foundation at Anderson Farm, Conestoga, PA. Providing Equine Assisted Therapy Services to military service members and their families: at no cost to the veterans